Last autumn, 2014, I spent 3-months in Georgia Tech running an academic interview study with users of activity trackers (more details in a future publication!). To run this study I needed participants. I’ve used snowball sampling (recruiting friends, and friends of friends, usually with shared tweets, Facebook posts and printed flyers) to good effect in previous studies, but knowing only a handful of people in Atlanta meant this wasn’t working too well. In my need for participants I decided try something I’d been thinking about for a while – paid advertisements on Facebook and Twitter. I actually ended up recruiting quite a few people and a few colleagues have since asked me about this, so I thought it might be useful to write a blog post.

In Atlanta I recruited about 10 participants through paid-adverts at a cost of approximately £30, making each participant cost about £3. Considering the amount of time saved this seems pretty good value, and in addition to those I directly recruited with the adverts I also broadened my “snowballs” and reached many of their peers. Not everybody who signed up ended up being available to interview, but I’d say I ended up recruiting a further 10 people as a result of the initial adverts. Since my campaign last year, a few colleagues have attempted to recruit participants (generally with more specific requirements: being a user of the app “Lift” for example) with similar adverts, but most have had less luck with their recruitment. I was recruiting current or previous users of activity trackers, while my colleagues having an easily targetable group obviously makes this method much more successful. The majority of participants I recruited using this method in Atlanta were aged over 45 (perhaps suggesting that younger generations are “blind” to Facebook adverts?), but I did also recruit some younger participants too.

My requirements for this study were fairly specific, but included a large number of people: English speaking; aged 18+; located in Atlanta; and previous, or current, users of an activity tracker. These requirements suited the targeted advertising options pretty well – meaning that I could be fairly sure that the people who were seeing my adverts were eligible to take part in the study and go “YES, that’s me!”. If you have an advert that is less well directed, you are likely to have fewer conversions, ie people seeing the advert who click through and sign up. 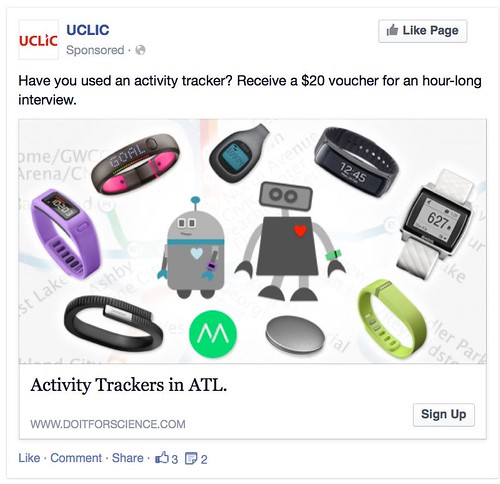 Since returned from Atlanta I’ve been recruiting participants in London for a replication of the study, so I once again turned to Facebook advertising. In my experience, the Facebook adverts were more successful (and better value) than the Twitter adverts, so I’ve decided to save some money and just concentrate on Facebook. See the remainder of this post for a little write-up on my experiences…

First off, I’m going to show you the stages I went through to get the ad campaign up and running – this way you can see the various options that are available to you, along with the ones I chose. 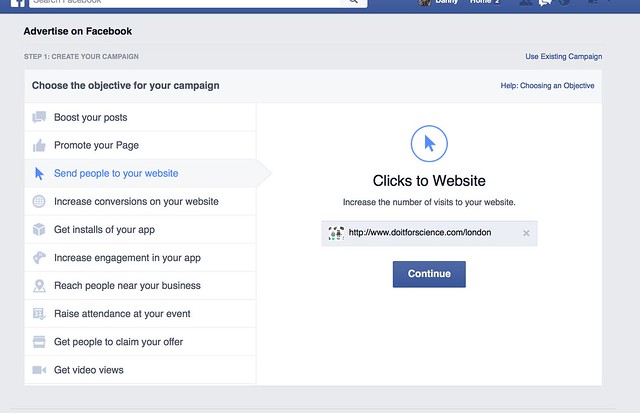 Because I already had a recruitment page set-up (using a UCL-hosted Opinio survey that redirects from doitforscience.com/london – the catchy and easy to remember URL hopefully easing people into the sign up process!), I chose to “send people” to my website. 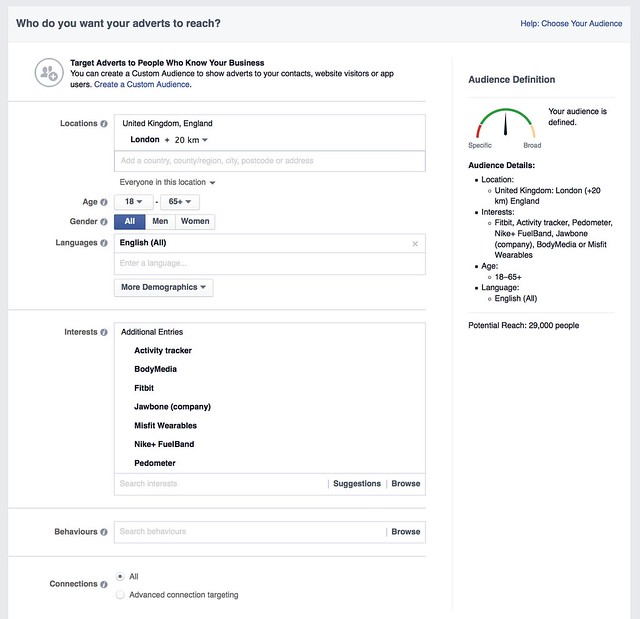 Next I had options for who to target the advert towards – in my case I selected people who are in London, aged 18+, and are “interested in” a number of pages related to my study – here I chose some specific activity tracker manufacturers (not all are listed), along with some more general terms. This helps to “narrow down” the people who will see the advert, meaning that the advert is more targeted and we’re wasting less money advertising to people who are not eligible to take part. 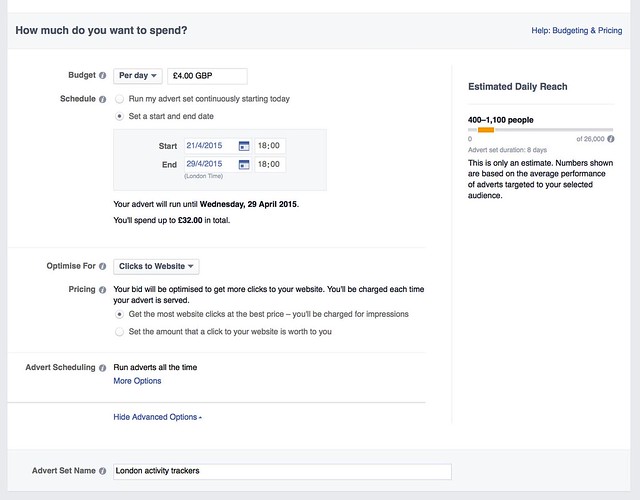 Next up, you can select how much you want to spend. Since I wanted to recruit quite a few people in a short time I set my advert to run for following 8 days, and to spend a maximum of £4 each day. This allowed me to keep an eye on my recruitment and end it early if I’ve already recruited enough people (I was hoping to get 15-20 more people signed up). 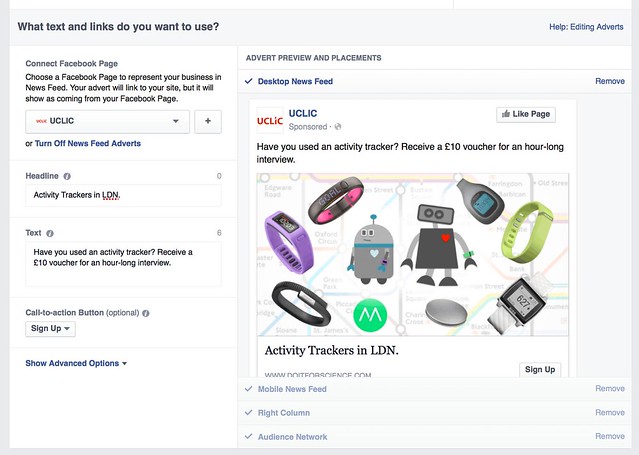 Here you can see my advert – I’ve uploaded an image and chosen my text. I’ve also chosen to advertise using my university department’s page, to make the advert look a little more trustworthy to potential participants. If you don’t wish to post through a page you won’t have the option of displaying adverts in the desktop news feed, so having access to a page is probably a good idea.

Once these steps are finished the advert is ready for approval – once it’s approved (in my experience this takes 30 minutes or less) it will start running according to the schedule set and you can watch the participants come rolling in!

The following image shows clicks through to my recruitment survey…

I left my advert running for the entire 8-day duration and recruited around 12 participants for the cost of £32 – similar to my results in Atlanta. These 12 (approx.) sign-ups came at the cost of 97 clicks, showing that only around 1/10 people who clicked the advert actually signed up to the study. I believe that I made my sign-up page as attractive and pain-free as possible (though, as we all know there is a fair amount of “small print” that needs to be included), I suspect that a large proportion of the 85 people who didn’t sign up for the study either just clicked through for the potential £10 voucher and didn’t have an activity tracker or weren’t interested in being interviewed, or weren’t eligible for some other reason.

The images below show some more details about who the advert reached, and where. 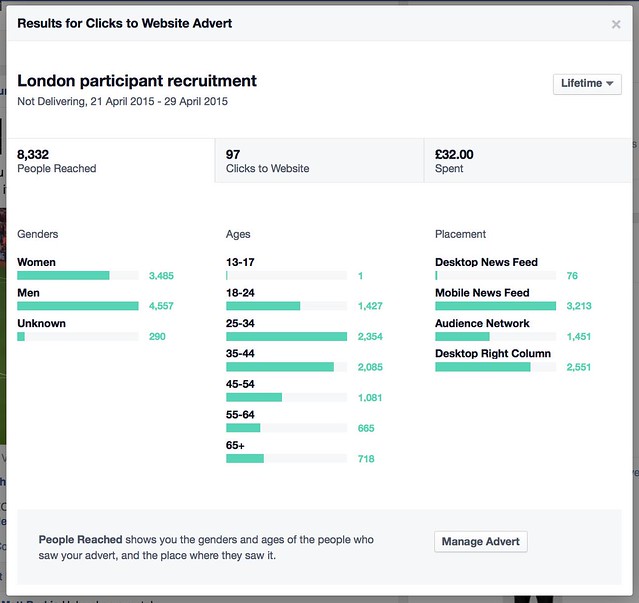 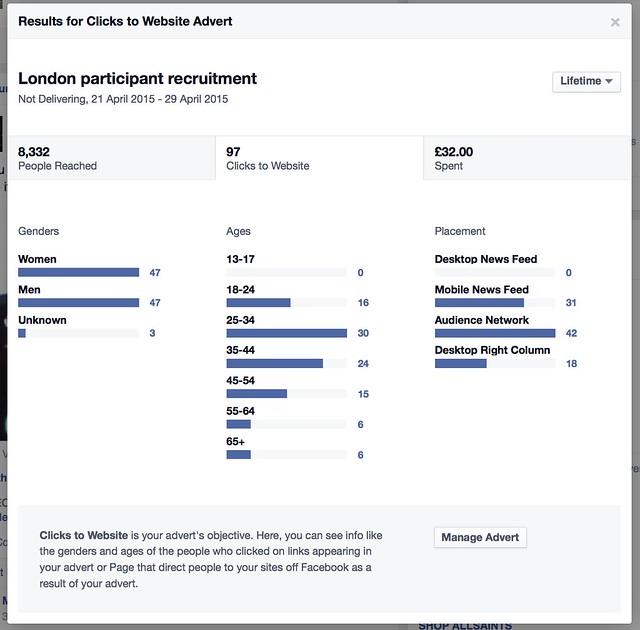 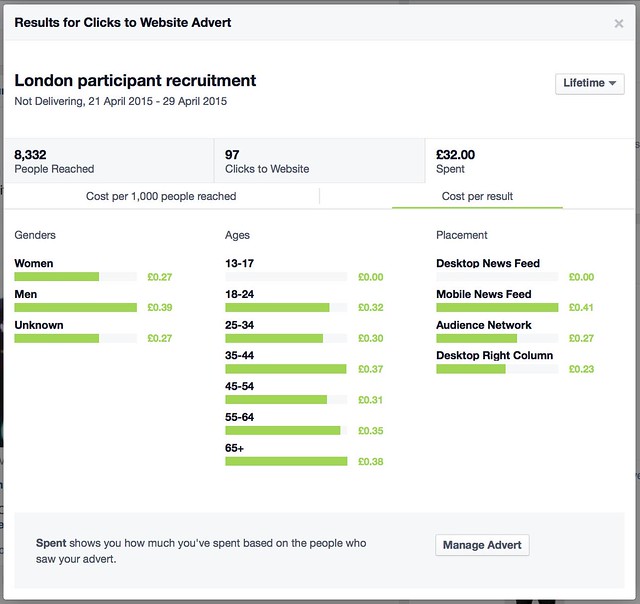 One Reply to “Recruiting participants with social media adverts”